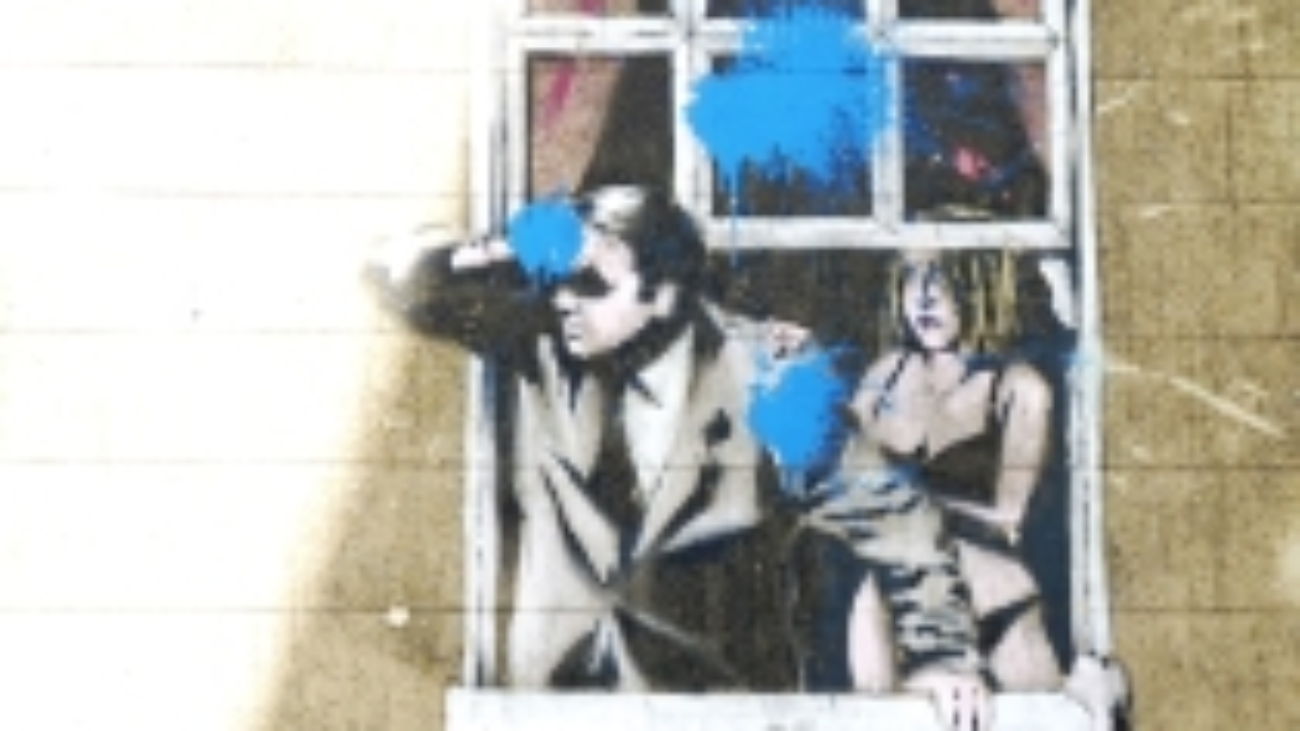 One of Bristol’s most famous individuals is a name that has only relatively recently come to prominence. The name Banksy has now become synonymous with street art or graffiti and Bristol. His reputation has been exponentially enhanced by his elusive nature that has captivated both the UK and the world. His creations encompass imagery that is usually politically or culturally motivated with the sole aim of engendering an emotive response. His artwork has not only gained notoriety but also substantial value with images that have relevant provenance being worth tens of thousands of pounds or more.

In many ways, Banksy has become a focal point for satirical street art and is probably one of its most famous proponents. One of the most important features of Banksy’s street art, apart from his obvious anonymity, is the fact that his art is often created and displayed in publicly visible locations such as external walls. This, coupled with his irreverent attitude towards authority, has endeared him to a generation.

Banksy has been documented as stating that his main inspirations have included artists that have long been involved in the Bristol underground scene, one of which is an artist titled 3D, who was a graffiti artist himself and subsequently found the musical group Massive Attack. Banksy studied the style and form that 3D used and developed his own unique stencil form that has become his trademark. This stencil style was purportedly envisioned whilst hiding from the police under a refuse lorry. Although he did not use the technique of stenciling originally, it became his favoured method and one that he has now become renowned for, and as he claims himself, it is much less time consuming.

Apart from his work being displayed in public locations, Banksy has held his own exhibitions; the first of which was in Los Angeles in 2002 at a Silver Lake venue 33 1/3. The exhibition called Existencilism – an obvious reference to his favoured technique. Subsequent exhibitions, including Turf War that was based in a London warehouse, have only served to further grow his popularity. However, Banksy has not only exhibited artwork, he has also produced several films, the first of which titled Exit Through a Gift Shop. The film debuted at the Sundance Festival to critical acclaim and was nominated for best documentary at the Academy Awards, showing that he has a flair for almost any form of visual communication.

As means of expression, Banksy has also shown that he is able to use many different forms and methods to achieve the desired effect, as displayed with the Barely Legal spoof, which appeared in 2004 and which involved altered £10 notes. The currency had been reproduced with the head of Princess Diana replacing the Queens’s head and text changed to Banksy of England.

For many Banksy is an enigma, an aloof individual whose unconventional take on life appeals. Whether we will ever find out the true identity of this person is unsure, however with the notoriety he has achieved in recent years, it is certain that his message no longer goes unheard. 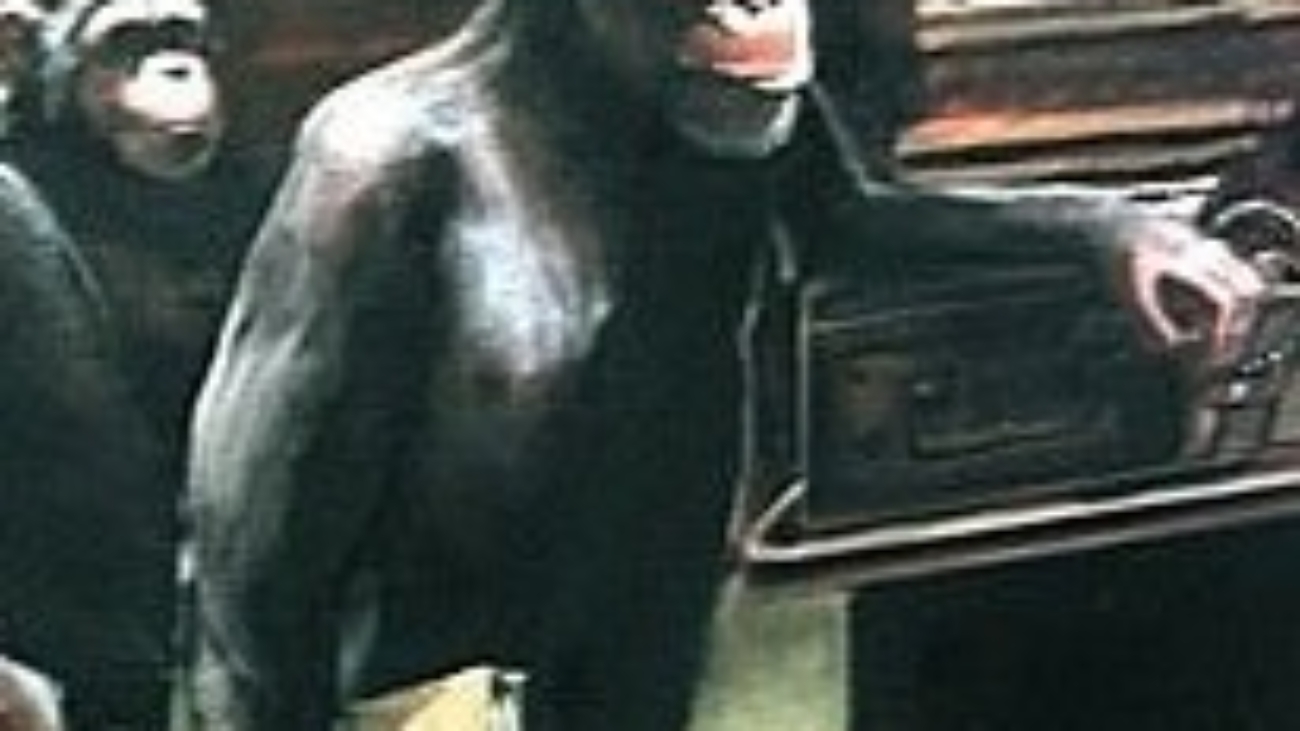 For many years, Banksy (or Robin to friends) was the scourge of Bristol and in particular Bristol City Council. Banksy’s stencil artwork caused much debate, some Bristolians appreciated Banksy’s work and were eager for their properties to be adorned with a Banksy original, but other Bristol residents were less enthusiastic, and annoyed at the abuse of their property.

In 2009, Banksy gave Bristol an exhibition by way of a thank-you for his roots, ideas, beliefs, attitude and paint supplies.

Following a conformist queue, the Banksy exhibition visitor was faced first with a Glastonbury festival toilet cubicle reconstruction of Stonehenge. Every detail was meticulous. Entering the first hall of Bristol Museum, a torched ice-cream van appeared. The sights and sounds were remarkable, every sense was exploited.

A series of famous statues, including the Angel of the North and Michelangelo’s David, were shown with various twists. Further displays included a lion who had consumed his trainer and a Metropolitan Police officer getting nowhere fast on an automated rocking horse.

Moving to the second large hall, a display of ‘Unnatural History’ was revealed including grazing chicken nuggets, a Banksy swimming fish finger and Tweety Pie with an attitude. The experience was made all the more convincing by the effective use of light and sound.

The Bristol Museum temporary display gallery had been adorned with Banksy artworks, some old and some new… showing images as you would not expect.

Exhibits and displays on other floors in the museum had also been enhanced. Banksy had introduced the War of the Worlds to one master, added a penis to the museum’s stalactite collection and a stuffed muzzled lamb to the natural history display. The dinosaur vomit could have been real!

The Bristol Museum upper galleries had become a treasure hunt for Banksy enthusiasts. Some hunters stopping to look at the other work from the permanent collection, others racing by and seeing the world through a view finder. Banksy had pulled the crowds into Bristol Museum, but it is a shame that so much else that Bristol museum had to offer was ignored by many.

The final gem was ‘Jerusalem’ by Tawfiq Salsaa. A scale model of Jerusalem carved from olive wood, purchased by Banksy and value added with the addition of soldiers and a lonely terrorist.

The Bristol Museum exhibition staff had embraced the role of authority figures that Banksy had highlighted the shortcomings in for so long, being keen to stop the queue inexplicably, tell off visitors if they looked too closely at an exhibit, used flash photography (despite a complete absence of signage to that effect) and had loud conversations on intercoms with volumes set at an excessive level – well, I suppose it kept them off the streets. Or perhaps the over enthusiastic Bristol museum staff were part of the exhibition!

The Banksy exhibition was fantastic, although in several instances quality control had lapsed in favour of a weak joke. 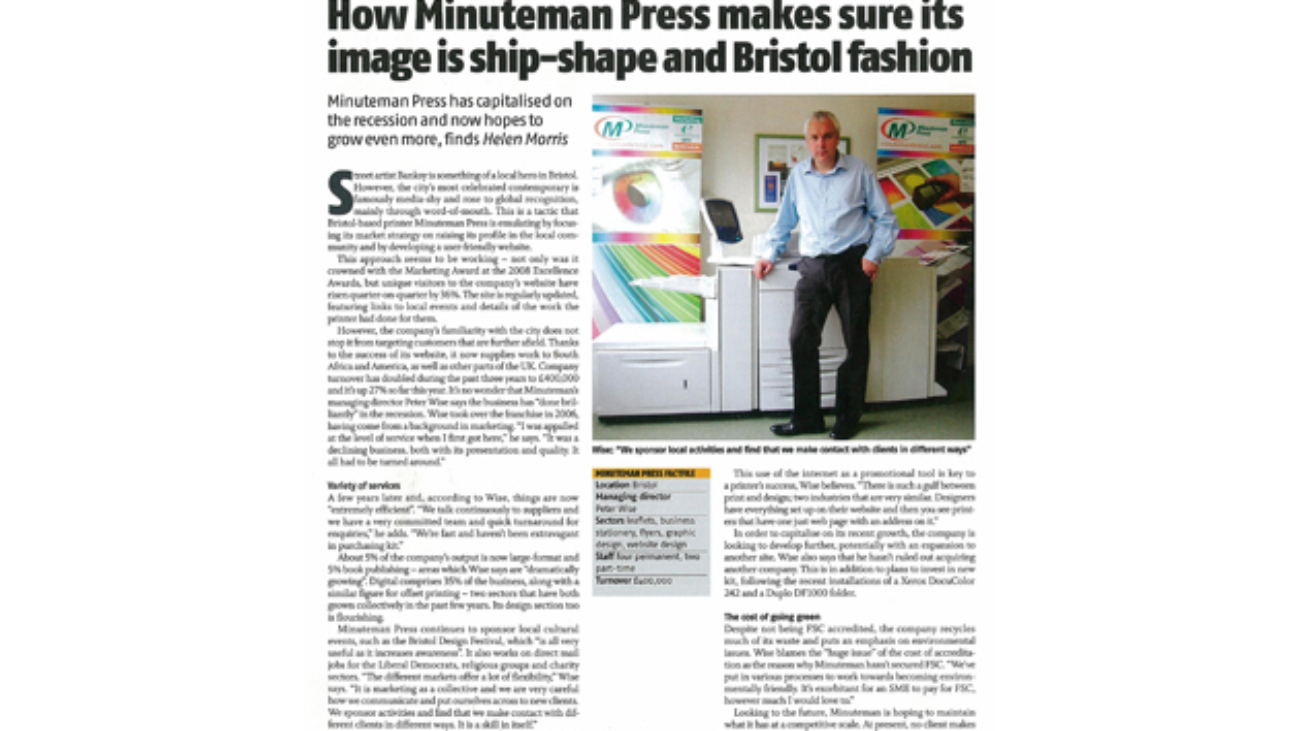 Minuteman Press Bristol has been given a unique opportunity to feature in the print industry’s number one magazine, PrintWeek.

The success of Minuteman Press Bristol is compared with that of the elusive Bristol artist Banksy: achieved through word of mouth, quality, efficiency, flexibility and value added service.

Read the whole article…
How Minuteman Press makes sure its image is ship-shape and Bristol fashion.